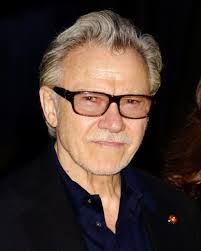 Harvey Keitel was born on May 13, 1939 in Brooklyn, New York. The son of a Polish mother and Romanian father who ran a Brooklyn luncheonette, Keitel was frequently reprimanded for cutting class at P.S. 100 and Abraham Lincoln High School. After being asked to leave Alexander Hamilton Vocational School for truancy, he was sent to Lebanon with the Marine Corps. Upon his return, he joined New York's Actors Studio where he studied under Frank Corsaro, Stella Adler and Lee Strasberg. Soon after, Keitel met up with a young student director by the name of Martin Scorsese, and they began the first of many collaborations.

The duo made their onscreen feature debuts with 1968's “Who's That Knocking at My Door?”, and followed up five years later with “Mean Streets”, a film that earned them both fame and critical acclaim. Riding on this success through the 1970s, Keitel and Scorsese put out two more seminal films, “Alice Doesn't Live Here Anymore” and “Taxi Driver”.

Despite this early success, Keitel's career took a dive in the 1980s with roles in mostly forgettable films with the exception of Scorsese's “The Last Temptation of Christ” in 1988. Three years later, his bad luck broke when he was ironically cast as a sympathetic detective in two hit films, “Thelma and Louise” and “Mortal Thoughts”. Soon after, he earned an Oscar nod for his portrayal of gangster Mickey Cohen in “Bugsy” and subsequently landed roles in such diverse films as “Reservoir Dogs”, “Sister Act” and Jane Campion's exotic “The Piano”. Throughout the 1990s, Keitel continued to display his versatility, giving solid performances in everything from the arthouse drama “Lulu on the Bridge” in 1998 to the goofy Adam Sandler vehicle “Little Nicky” in 2000.