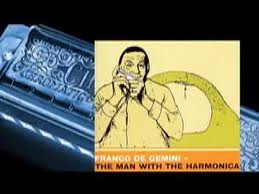 A legendary icon has left us.

Franco De Gemini has died at age 84. Filippo de Masi, son of Franco, the well-known composer, which is dedicated to the event, said:'' He was a second father to me and an artist out of the ordinary. A huge pain that I cannot even describe. Now you can play up there with Dad what you like, I just wish we did not have to feel what has happened.''

Franco De Gemini, known for his talent with the harmonica, was born in Ferrara on September 10, 1928. He spent his childhood, adolescence and youth in Turin, where he learned to play in the orchestras of that city. Franco became interested in the harmonica, in the second half of the 1940s, at school and Torinesi Club. As a musician EIAR at the Festival of Sanremo, in 1953 began playing for several major film scores. The first is ''Pane, amore e fantasia'' with Alessandro Cicognini (directed by Luigi Comencini). He then enters the orchestra of the master Berto Pisano, with whom he recorded music for television, recording in the studios of Fonit Cetra.

During his career as a musician De Gemini played with the greatest masters of music in the history of Italy such as Francesco De Masi, Piero Piccioni, Nicola Piovani, Armando Trovajoli, Riz Ortolani, Piero Umiliani, Carlo Rustichelli, Franco Micalizzi and many others . During his life he performed on over 800 soundtracks. One of his best performances was for West Side Story, written by Leonard Bernstein, in 1961. In 1964 he collaborated with Fabrizio De André, playing in reincisione of  ''La ballata dell'eroe''. Also the soundtrack of the Italian film ''Italiani brava gente'' written by Armando Trovajoli, with nothing less than the legendary Duetto flutist Severino Gazzelloni. In the midst of these experiences, he became known for the films of Morricone. He took part in the music of'' The Good, the Bad and the Ugly'', ''A Fistful of Dollars'', and later “Once Upon a Time in the West'' and ''My Name Is Trinity''.

In 2006 he released a CD, "The Man with the Harmonica ', in which he had added a better musical history. In 2007, however, it was the turn of a book, From beat to beat, in which De Gemini told about his experiences as an author, accompanied by anecdotes.

An artist, a talent, a gentleman. Franco De Gemini has been a source of pride for our nation. In his hands, the harmonica became a festival of feelings and sensations. Difficult to repeat. Definitely unforgettable.