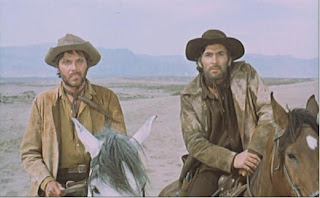 [Michel Lemoine & Lee Burton]
French actor and director Michel Lemoine died at his home in Vinon, Centre, France on July 27, 2013. He was 90.

As a director he mingled eroticism with drama and comedy working with Janine Reynaud and his wife, along with his favorite performers, Martine Azencot, Nathalie Zeiger and Marie-Hélène Kingdom.

He turned reluctantly towards making pornographic films using his most often pseudonym Michel Leblanc directing Olinka Hardiman who he made a star of X films (“Marilyn, mon amour”). In 1976, his film “Les Week-ends maléfiques du Comte Zaroff” was prohibited in theaters by French censorship.

He left the acting profession in the 1990s, and made only sporadic appearances.

Lemoine appeared in two Euro-westerns: “The Road to Fort Alamo” (1964) starring Ken Clark and directed by Mario Bava and “Cemetery Without Crosses” (1968) directed by and starring Robert Hossein.
Posted by Tom B. at 8:58 AM