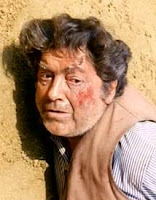 Emiliano Gora was born in Genoa, Liguria, Italy on July 27, 1913. As Claudio Gora, he was a particularly prolific actor making some 155 appearances in film and television over nearly 60 years from 1939 to 1997. In the 1950s he dabbled with directing and screenwriting and directed the film “Three Strangers in Rome” (1958) which was incidentally the first leading role by Claudia Cardinale. He’s best remembered for his appearances in “Adua e le compagne”, directed by Antonio Pietrangeli, “Tutti a casa” by Luigi Comencini (both 1960) and Dino Risi's “A Difficult Life” (1961).

During his long and distinguished career Claudio appeared in five Euro-westerns from “The Tramplers” in 1965 to “The Five Man Army” in 1969.

Today we remember Claudio Gora on what would have been his 100th birthday.