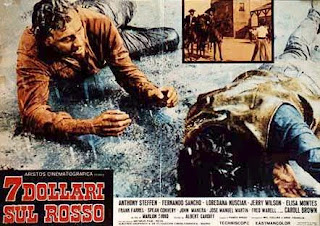 Johnny Ashley has been away leading a wagon train. During his absence, a gang of outlaws attack his ranch, kill his wife and kidnap his young son. Determined to take revenge, Ashley refuses the service of the sheriff, and spends many years during which Johnny becomes famous for his exploits as a gunfighter. Still he has failed to find his son and the outlaw Sancho, who kidnapped him. Sancho has raised Jerry as his son making him into an outlaw. At Wishville, the restless and discouraged Johnny arrives just when the situation is tense because of the exploits of the band Sancho. Influenced of Emily, manager of the saloon and his old flame, the gunman this time welcomes the help of the sheriff. During a bank robbery, Johnny and the sheriff, assisted by the townsmen, disperse the bandits and kill Sancho. Jerry furious over Sancho’s death rushes to avenge who he believes is his father, and comes face to face with Johnny: the revelation that Sancho is not his father cannot stop him. A duel between the two men is inevitable.

YouTube trailer: https://www.youtube.com/watch?v=SqEHEhM52rk
Posted by Tom B. at 5:54 AM