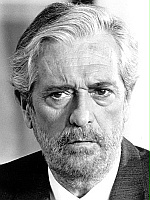 Fernando José Hilbeck Gavalda was born in Madrid, Spain on July 7, 1933. He grew up in the city of Lima, where he received his doctorate in Philosophy and debuted in the theater. He then moved to Rome and acted in the theaters Pirandello and De Servi for two years. Also in Italy he made his film debut in 1961 in “Francisco de Asís” a film by Michael Curtiz.

Back in Spain, he was involved in several co-productions such as “Chimes at Midnight” (1965) directed by Orson Welles and he appeared a dozen Euro-westerns from “The Terrible Sheriff” (1962) to “The Man Called Noon” and the TV series ‘The New Zorro’ (1993).

Today we remember Fernando Hilbeck on what would have been his 80th birthday.