7 PISTOLS FOR A MASSACRE 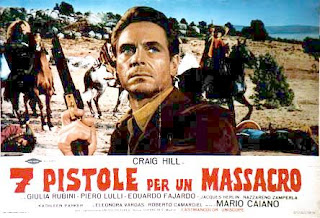 Will Flaherty, a gunslinger, returns to his hometown after ten years in jail on charges of murder but finds a hostile welcome from both the townspeople and the woman with whom he was engaged. He is consoled by Peggy, the owner of the saloon, who has remained faithful to his memory and accepts his version of events. Also arriving in town are a mean bunch of bandits who rob a wagon load of gold. Having miscalculated the bandits, however, have come to town prematurely and, to avoid any surprises at the appropriate time of the robbery, start to imprison men and kill anyone who resists them. Will, who among other things has discovered that a member of the gang is the man responsible for his wrongful conviction. He in turn, is savagely beaten and imprisoned. Freed by a friend, the gunman manages to get hold of the outlaw and takes him to the neighboring town, while obtaining a clearing of his name. When the coach the gang is waiting for finally arrives in the country, the bandits have the unpleasant surprise to find it crowded with sheriff's deputies who kill them all in a gunfight.