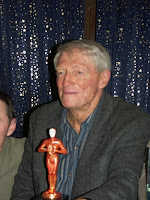 Bradford Harris was born in St. Anthony, Idaho on July 16, 1933. His family moved to California where he attended Burbank High School then received an athletic scholarship to UCLA where he studied economics. When he injured his knee playing football he was advised to take up weight lifting to strengthen the injury which developed his interest in bodybuilding.

Harris entered films as a stand-in, stuntman, and later an actor. His first roles were in André de Toth's “Monkey on My Back” (1957) and “Li'l Abner” (1959). With his athletic physique, Harris travelled to Rome to watch the 1960 Summer Olympics and perform stunts in Stanley Kubrick's “Spartacus”. He stayed in Europe for the boom in European sword and sandal, Eurospy, and spaghetti western genres. Harris discovered, when working in Germany, that stunt coordinators were nonexistent in that country and he often did extra duties as a stuntman, stunt coordinator, and second unit director as well as an actor.

Harris made his debut as a leading man in 1961 in the title role of Gianfranco Parolini's “Goliath and the Giants and Samson”. He would have a long, continuing relationship in several films written and directed by Parolini. Harris also began to be teamed with Tony Kendall starting with the Western “Black Eagle of Santa Fe” (1965), and he later married his co-star in that film, Czech actress Olga Schoberová [1943- ]. They were married on November 16, 1967 and divorced in 1969. They had a daughter named Babrinka (Sabrina) [1968- ].

He also served as executive producer on several of his films including “King of Kong Island” (1968) (which he also starred in) and Jack Cardiff's “The Mutations” (1974). He later made seven appearances on the American soap opera Falcon Crest as ‘Deputy Duffy’ (1984-1989). His most recent film was the Andrea Zaccariello's comedy Boom, released in 1999.