THE NEPHEWS OF ZORRO 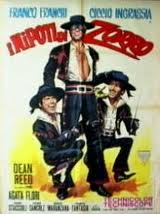 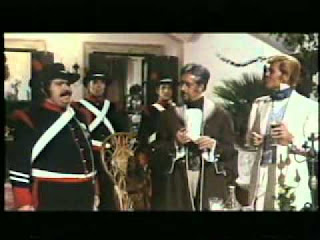 Franco and Ciccio La Vacca are two Sicilian cousins ​​landing in California with the intention of searching for gold, not knowing that in the region roams the infamous Zorro, champion of the poor and the innocent. The two end-up accidentally in his hands while the man is releasing two prisoners who had been imprisoned unjustly. Punished by Zorro with a Z on their backside, the two Sicilian cousins ​​come to their uncle's house Don Diego de la Vega, not knowing that his son Raphael is Zorro. The two cousins ​​are given money to disappear and leave the area, as it may compromise the identity of Zorro as they saw his clothes in the room of Raphael. But Franco and Ciccio are immediately conned by two crooks. Again, poor, the two cousins ​​are given more money from Zorro who has just robbed a treasure of inestimable value from the overbearing judge who dominates the pueblo. But it is right next to Zorro’s hideout that Franco and Ciccio begin to look for gold. Meanwhile Carmencita, who has a large crush on Zorro, does not even imagine that he is her boyfriend Raphael, who tells her that the he will meet her one evening. Ecstatic, Carmencita looks forward to her rendezvous with Zorro, unaware that her maid has told of the meeting to the guards of the court. At the same time, Franco and Ciccio have taken some of Zorro’s clothes, and knowing of Carmencita’s encounter with the masked man, decided to replace him for the night. But the whole plan will go ahead and Carmencita will be faced with three Zorros! Even the guards, are confused and do not know who the real Zorro is and decide to arrest Franco and Ciccio because they cannot defend themselves. Taken to the gallows, the next day, the two are about to die when Zorro arrives saves them. In the end all ends well and the judge is stopped. Franco and Ciccio are sent away as far as possible, with a lot of money but once again it is stolen by two crooks.