Joaquín Luis Romero Marchent was born in Madrid on August 26, 1921, and is part of a family of theater and film makers. His father was Joaquín Romero Marchent Gómez de Avellaneda, who founded and edited the magazine Radio Cinema which was published between 1938 and 1963, and was co-founder, with actor Rafael Duran, Intercontinental Films.

Their first release was “Juzgado permanente” a detective comedy (1953), and later “El hombre del paraguas blanco” one of the early co-productions with Italy. Joaquín’s influence and relevance grew with modesty in the Spanish film industry until he, along with his brothers, became giants in the film business.

His contribution to the Euro-western began with “El Coyote” (1955) and “Justice of the Coyote” (1955). These two films made back to back began a cultivation of the Western genre and opened the door for many of the European co-productions to come that were filmed in Spain, such as “A Fistful of Dollars” (1964). The actors he used in his production such Fernando Sancho opened the door for many Spanish actors to be cast in the roles of Mexicans.

Joaquín Luis Romero Marchent became his own producer and scriptwriter, and joined with Italian co-producer Alberto Grimaldi, who was just entering the field. He began a cycle of Spanish Euro-westerns beginning with “The Taste of Revenge” (1963) and “7 from Texas” (1964), two of the best westerns ever shot by a Spanish director, that customized generic production admirably, at the same offered physical and psychological stories, that during previous years had been made in Hollywood by directors like Anthony Mann, Budd Boetticher, Henry King and Robert Parrish, therefore, bridging the traditional view of the gender of  Hollywood and the Spaghetti Western.

Other achievements were “7 Hours of Gunfire” (1964) an “Fedra West” (1967), working as co-producer, director and screenwriter on many of these films. During these years he worked with his brother Rafael, for example on “Garringo” (1969) and Italian directors, for instance on “I Want Him Dead” (1967) with Paolo Bianchini, “Kill Them All and Return Alone” (1969) with Enzo G. Castellari and “Arizona Returns” (1970) with Sergio Martino.

Joaquín Romero Marchent then drifted away from the Cinema, but did not completely abandon the Western. He worked on the TV series “Curro Jimenez”, and although it was a about a Spanish Robin Hood it contained the essence of the American Western. Joaquín Romero wrote and directed twelve chapters of “Curro Jimenez”, and participated in the creation, production and coordination. “Curro Jiménez” was one of the most popular series in every way, and was distributed in the five continents, Spanish TV in its history, enthroned the protagonists Sancho Gracia (who recently died), Alvaro de Luna and Jose Sancho.

In all Joaquín Luis Romero Marchent was associated with 16 Euro-westerns as either a producer, director or screenwriter.

[Thanks to Dan van Husen, who worked with Joaquín, for his help in assembling this obituary.]

For more information see the biography written by Carlos Aguilar. 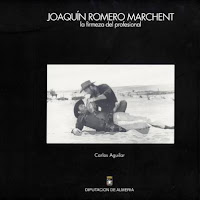