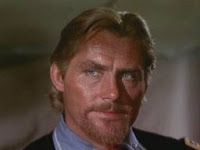 Robert Shaw was a roughly hewn British character actor who made his stage debut in 1949 with the RSC and Old Vic and began appearing in films in the early 1950s, often in war-themed flicks. He was born Robert Archibald Shaw on August 9, 1927 in Westhoughton, Lancashire, England and raised in Scotland. Finally settling in Cornwall he states in his biography that he was drawn to acting and writing from his youth. Shaw trained at the Royal Academy of Dramatic Art. In 1949 he debuted onstage at the Shakespeare Memorial Theater at Stratford-on-Avon. From 1951 he began to appear in British and (later) American films as a character actor, frequently playing heavies such as the steely-eyed killer Grant in From “Russia with Love” (1963). It was later in his career that he became a star and lead in films.

Interestingly Shaw twice played a villain opposite a hero played by Sean Connery. The first was that of the killer Grant in “From Russia With Love” (1963) opposite Connery's secret agent James Bond 007, the second was the Sheriff of Nottingham in "Robin & Marion" (1976). He also proved his versatility with an exuberant, Oscar and Golden Globe nominated performance as Henry VIII in the fine Robert Bolt adaptation, “A Man For All Seasons” (1966), unfortunately he won neither. It wasn’t until the 1970’s before he began to really becomea a box office star after his appearances in several blockbuster movies, including “The Sting” (1973), as Doyle Lonnegan. Then came “The Taking of Pelham One Two Three” (1974). These two films lined up his finest role as that of Quint, the grumpy old sea dog in “Jaws” (1975). It is well documented that he wrote and improvised many of his own lines. Shaw appeared in two Euro-westerns: “Custer of the West” (1967) as General George Armstrong Custer and “A Town Called Hell” as ‘The Priest’. Shaw was married to actress Mary Ure [1933-1975] (1963-1975) is the father of actor Ian Shaw [1969- ], and died of a heart attack on August 28, 1978 in Tourmakeady, County Mayo, Ireland. Today we remember Robert Shaw on what would have been his 85th birthday.