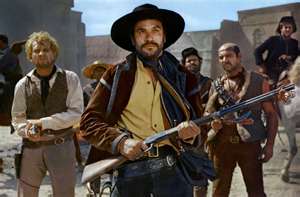 After massacring an Indian village, outlaw Duncan finds his men falling victim to a solitary rider, Navajo Joe. Joe saves two prostitutes who have overheard Duncan plot with Lynne, the town doctor, to steal a train full of money belonging to the bank. Joe steals the train back from Duncan's gang. He asks the townspeople of Esperanza to pay him to protect them from Duncan, making an offer of "I want a dollar a head from every man in this town for every bandit I kill". The townspeople reject him, as they "don't make bargains with Indians." Lynne's wife Honor persuades them otherwise. Joe sets a trap for Duncan but is caught and tortured; Lynne and Honor are killed. Rescued by an old man from the saloon, Joe again steals the train and eradicates Duncan's gang. A final showdown in an Indian cemetery between Duncan and Joe ensues where Joe reclaims the pendant which Duncan stole from his wife when he murdered her. As Joe turns, Duncan shoots Joe with a hidden gun. Injured, Joe grabs a tomahawk and throws it, hitting Duncan square in the forehead. With Duncan dead, Joe sends his horse back to town, for the reward.

[Aldo and Nicoletta told me they worked out a way for her to hold on to his arm while he pretended to pull her out of the saloon and out into the street by her hair. Nicoletta said surprisingly Burt seldom talked to her on or off the set even though she was one of the few people there that could speak English. Aldo said one of the reasons Burt was hired was that he could do his own stunts which cut down on the cost of production as they didn't have to stop scenes or hire a stuntman.]