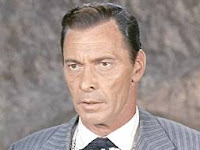 Patrick Barry Sullivan, the star of scores of movies and over one-hundred TV shows, was born on August 29, in 1912 New York City. While never a star, he was one of those elite supporting actors who were still in demand until the day they decided to retire.

Sullivan was a theater usher and department store employee at the time he made his first Broadway appearance in January 1936, in "I Want a Policeman" at the Lyceum Theatre, which lasted only 47 performances. Other plays he appeared in on the Great White Way were the drama "St. Helena" (1936) and the 1938 comedies "All That Glitters" and "Eye On the Sparrow." All three plays were flops. He finally appeared in a hit play when he transferred into the role of Bert Jefferson in "The Man Who Came to Dinner," by Moss Hart and George S. Kaufman.

In the 1941-42 season, he appeared in three more flops: "Mr. Big," "Ring Around Elizabeth," and "Johnny 2 X 4." Wisely, he stayed away from Broadway for a decade, when he again transferred into a hit, taking over the role of Barney Greenwald from Henry Fonda in "The Caine Mutiny Court-Martial." His last appearance on Broadway, was in the original "Too Late the Phalarope" in 1956.

In the late 1930s, Sullivan gained movie acting experience in two-reel comedies produced by the Manhattan-based Educational Studios. After giving up on his Broadway career, Sullivan made his "official" film debut in a 1943 western "Woman of the Town." Sullivan never caught on as a lead, but excelled at supporting roles in which he could play tough, aggressive characters. His most notable roles were as the eponymous "The Gangster" (1947), his Tom Buchanan in the Alan Ladd vehicle "The Great Gatsby" (1949), and his movie director in "The Bad and the Beautiful." He continued acting in films until 1977, rounding off a near 40-year movie career with an appearance in "Oh God." He continued to appear on television until 1980, though he had one last role in 1987. Sullivan appeared in one Euro-western “Take a Hard Ride” (1975).