MY NAME IS PECOS 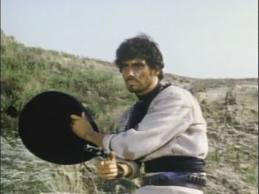 Skilled pistolero Pecos Martinez rides into the village of Houston and sets about clearing it of outlaws. But his motives prove to have revenge as their source. This was Martinez's birthplace and he has returned to settle a score with gang leader Kline/Clain. Kline/Clain, however, is preoccupied with retrieving the loot from a recent robbery which has been stolen from him by one of his own men and a local towns person whose identity he has yet to uncover. The hunt for the loot and Pecos' vengeance quest become inevitably combined and the only outcome is more bloodshed.

[Robert Woods related to me in my interview with him in the spring of 1989 that, “The make-up I had to use for my character was very painful and bothersome. Tape was used to pull back the corner of my eyes and then an extra piece of skin was added to make me look more like a Mexican. Being only 31 at the time, my skin was still tight and the make-up really was a hastle.” He told me a great story about going to Senegal on vacation sometime a few years after “My Name is Pecos” was released. Arriving in Senegal he was virtually mobbed the entire time he was there. This was a new experience for him and although flattered he was tired and needed a rest. Of all the places in the world he could have gone to, he picked the one country where he was considered a national hero. Years later when he returned to the U.S. he caught a cab in New York City and the cab driver turned around and said, “Hey you’re Pecos!” the driver was from Senegal.]