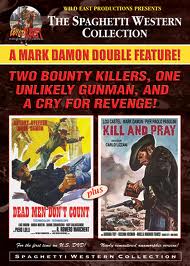 A Southern aristocrat, George Ferguson (Mark Damon), oversees the massacre of a band of Mexicans whose land he has stolen. The small son of the Mexicans' leader somehow survives and is found wandering in the wilderness by an itinerant preacher and his single-parent sister. The preacher takes the child on as his own and the boy makes an ideal companion for the preacher's small niece, Princy. The years pass by happily until the day that Princy (Barbara Frey) runs away with a company of travelling stage-players. The adopted Mexican (Lou Castel) vows to find her and bring her home. His travels lead him straight to San Antonio where a run-in with Ferguson's men, who are forcing Princy to work as a prostitute, sets in motion a chain of events that result in the Mexican remembering shocking details from his past.

Actor Lou Castel only made a few Spaghetti Westerns but the unusual characters that he chose to play ensured that he made a lasting impression on genre fans. Here he plays a very reluctant and unassuming young gunman from a religious background who earns himself the moniker Requiescant due to his habit of saying prayers over the bodies of the villains that he kills. Requiescant's main enemy here, George Ferguson, is one of Mark Damon's most interesting genre characters while also being one of the genre's most unusual villains. A thin and peculiarly anemic looking dandy, Ferguson is a violent and psychotic racist and misogynist. His aristocratic cape makes him look like a vampire while his Confederate great coat looks like it was borrowed from a Third Reich storm trooper.

Whenever Requiescant is forced to kill somebody, the mysterious Don Juan (Pier Paolo Pasolini) and three members of his war council immediately show up and appropriate the dead men's weapons for use in their long-planned revolution. And when Juan discovers Requiescant's true identity, he uses the personal conflict that is present between Requiescant and Ferguson as the trigger that makes the revolution become a reality. Pasolini's numerous appearances here largely consist of him popping up to deliver short bursts of political and moral wisdom and the earnest tones that his English dubber employs to deliver these political speeches adds to the trippy and sub-psychedelic vibe that runs through the whole film.

Interestingly, the film's political content would seem to reach much further than Pasolini's periodic verbal interjections. The set-pieces that feature racist and misogynistic behavior would appear to have a purpose that goes beyond mere grindhouse-style shock tactics: there's an impression that Lizzani and his writers were seeking to provoke a moral or political response with their approach here. But the film's biggest political statement is perhaps delivered when Juan's planned armed revolution is largely made redundant by what is effectively a relatively peaceful, Spaghetti Western-set, workers' general strike.

While it's not difficult to understand why a character like Pasolini would choose to be involved in a show like this, it has to be said that the film's political themes do not overshadow or interfere with its ability to entertain as a genre feature. The largely allegorical nature of the show's political content means that it still works exceedingly well as a hugely entertaining, if slightly surreal, Spaghetti Western. Naturally there are several action set-pieces present here and most of them are original and well-staged in their execution. Kill and Pray is essentially a fairly low-budget affair but undoubted care and technical expertise went into its assembly and the show boasts some really good cinematography and editing. Most of the acting here hits the mark too and genre stalwart Riz Ortolani provides an interesting soundtrack score.

Picture quality here is near excellent. The presentation boasts really vibrant colours and nothing in the way of print damage. However, odd scenes do feature a touch of motion blur. The show's sound quality is very good.

Two unscrupulous bounty killers, Fred (Anthony Steffen) and Johnny (Mark Damon), arrive in Blackstone where the corrupt sheriff, Bob (Piero Lulli), soon arrests them. Bob is working for a local businessman, Rogers (Luis Induni), who has been stealthily arranging the murders of local landowners so that he can take over the area and make a mint when the railroad arrives. As such, Fred and Johnny have been set up to hang for a crime that they didn't commit. However, years earlier one of Rogers' first victims was the husband of his current wife (Maria Martini) and she gave away her young son when she subsequently married Rogers. A distinctive pistol that Johnny owns gives Rogers' wife the impression that he is her son and she arranges for the duo to be released. Rather than leaving town, the duo stick around and offer their assistance to the remaining landowners who are fearful for their lives and land. With his best men being gradually wiped out by Fred and Johnny, who are now close to discovering the truth about his criminal activities, a desperate Rogers sends for the infamous Lassiter Brothers' gang (Raf Baldassarre and company) and the scene is set for a violent climactic confrontation.

This show has something of an all-star cast in genre terms. Anthony Steffen and Mark Damon play their usual anti-hero genre types to good effect as does Piero Lulli in his role as the corrupt sheriff but the show is nearly stolen by Raf Baldassarre who enters the picture for its final third or so. Clean-shaven, scrubbed up and smartly turned out in generic cowboy clothing, Baldassarre's Lassiter looks quite boyish and unassuming when compared to the raggedy dressed and unwashed varmints that the actor usually plays. However, looks can be deceiving and Lassiter turns out to be one of the most despicable and callous villains in Baldassarre's quite considerable genre filmography. The rest of his gang are no slouches either. Other familiar faces that genre fans will be pleased to find here include Barta Barri and Carlos Romero Marchent who play a father and son whose land is targeted by Rogers.

This is essentially a lower-middle tier genre entry that punches well above its own weight thanks to a number of key ingredients. As noted already, it's got a pretty good cast. The show also boasts some solid and reasonably stylish direction and cinematography by the ever dependable Rafael Romero Marchent and Franco Delli Colli. Add to this a rousing soundtrack score (courtesy of genre stalwart Riz Ortolani) and an engaging storyline that has a neat twist ending that serves to pass comment on the genre's obsession with family ties and you've got a decent little genre flick. I'd never come across this show prior to Wild East's DVD release and I thoroughly enjoyed it. The only slightly negative aspect here for me is the odd play for mild laughs that fall flat but these comedic blips are few and far between and so don't adversely affect the show too much.

Picture quality here is very good for the most part. There's not much in the way of print damage but odd scenes do feature a touch of motion blur. A short early sequence and parts of the front and end titles have seemingly been sourced from elements of a slightly lesser quality in order to present the film uncut. The presentation's sound quality is generally good.

Extras: Mark Damon Interview and an image gallery that includes a comic strip adaptation of the film.

A more detailed review of Kill and Pray can be found here: http://www.dvdtalk.com/dvdsavant/s1732pray.html