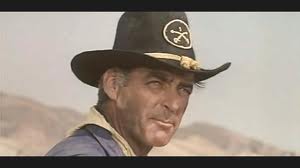 Francis Timothy McCown was born in Los Angeles, California on August 8, 1922. As Rory Calhoun he appeared in over 80 films and television episodes. At age thirteen, he stole a revolver, for which he was sent to the California Youth Authority's Preston School of Industry reformatory at Ione, California. Later he worked as a boxer, a lumberjack, a truck driver and a cowpuncher. Tall and handsome, he benefited from a screen test at 20th Century-Fox, arranged for him by Sue Carol, a Hollywood agent and the wife of actor Alan Ladd, who is said to have spotted Calhoun while he was riding a horse in Los Angeles’ Griffith Park. He debuted on screen in “Something for the Boys” (1944), with Carmen Miranda, billed as "Frank McCown". David O. Selznick changed his name to Rory Calhoun, and after playing small parts for a while, he graduated to starring in western films, including “River of No Return” (1954) with Marilyn Monroe and Robert Mitchum. Calhoun's better-known pictures include “How to Marry a Millionaire” (1953) with Lauren Bacall, Monroe and Betty Grable, and “With a Song in My Heart” (1952) with Susan Hayward. Rory made one Euro-western: “Finger on the Trigger” (1965).

From 1959 to 1960 he starred in the CBS television series "The Texan" (1958). More than two decades later he returned to CBS for five years as Judge Judson Tyler on the daytime serial "Capitol" (1982). His final appearance at 70 years of age, but handsome as ever, was as Ernest Tucker in “Pure Country” (1992). Calhoun died on April 28, 1999 in Burbank, California. Today we remember Rory Calhoun on what would have been his 90th birthday.