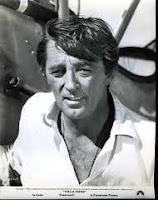 Born on August 6, 1917, in Bridgeport, Connecticut, the legendary tough guy on and off-screen, Robert Mitchum was one of the most memorable leading men of the twentieth century. After a youth spent as a laborer, vagrant, and professional boxer, he went to Hollywood, where he found employment in the film industry as an extra in 1943. A prolific leading man particularly associated with the post-war film noir thriller, his laconic, heavy-lidded manner was deceptively casual, disguising a potent screen presence.