In the film “Bullets Don’t Argue” 1964, Pat Garrett (Rod Cameron) is chasing Billy and George Clanton (Horst Frank, Angel Aranda). After capturing the outlaws in Mexico he begins his long trek back to Texas on foot. On the way he stops at the hacienda of Miguel where he asks for three horses. Migeul gives the sheriff the horses and some sombreros for the outlaws since they have lost their hats in the chase. After the trio leaves Miguel has one of his peons tell the bandit Santero (Dick Palmer) that Garrett has been to his ranchero and is carrying the money from the bank robbery. 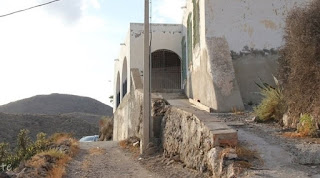 This location is a house located behind the Hotel Balneario de Sierra Ahamilla in Almeria, Spain. 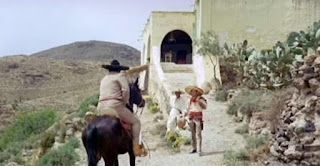