Who Are Those Guys? ~ Lanfranco Ceccarelli 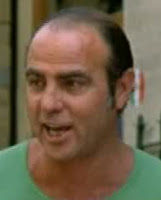 Lanfranco ‘Franco’ Ceccarelli was an Italian production manager, assistant director and sometimes stuntman and actor. Born in Italy sometime in the late 1930s, he is the younger brother of stuntman, Pietro Ceccarelli. He started out his career as an actor in 1957’s “Le Notti Bianche” (White Nights) directed by Luchino Visconti and starring Marcello Mastroianni, Jean Marais and Maria Schell. After a few more small appearances on film including two three Euro-westerns and as a master of arms, he switched careers becoming a production manager starting with “Acquasanta Joe” (Holy Water Joe) in 1971 a Euro-western directed by Mario Gariazzo and starring Richard Harrison, Ty Hardin and Lincoln Tate. His last credit is in 1976 as a production manager on “Rulers of the City” directed by Fernando Di Leo and starring Jack Palance and Al Cliver. Apparently still living in Rome, Italy I’ve been able to find out no further information about him.