Lifelong Eastwood fan gets a special book for Father’s Day 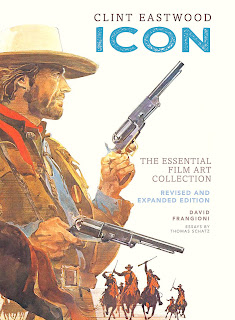 He rose to international fame as the Man with No Name.

Clint Eastwood is a Hollywood legend with an award-winning film career that spans decades. He may have reached stardom portraying a nameless vigilante in “The Good, the Bad and the Ugly,” but today his name and likeness are recognized all over the world. Eastwood was honored with the American Film Institute’s Lifetime Achievement Award in 1996.

A new edition of the book “Clint Eastwood: Icon,” presents Eastwood as an archetype that goes beyond the narratives of his films. As “The Essential Film Art Collection,” it features the posters, lobby cards, cardboard cutouts and studio ads from Eastwood’s films. All of the memorabilia is from author David Frangioni’s own collection.

It’s the perfect Father’s Day gift for my dad, Joel Bruestle, a Clint Eastwood fan for more than 30 years. As, I’m sure, many other fathers in Snohomish County are.

This revised and expanded edition spans six decades of films, from “A Fistful of Dollars,” which made Eastwood a star, to his most recent film, “15:17 to Paris,” which he directed. The book has nearly 100 new pages, featuring some of the rarest Eastwood memorabilia in the world.

“It just seemed kind of small to have this big collection all to myself. It didn’t make sense. I wanted to share it,” said Frangioni, 51, who received Eastwood’s blessing to write the book.

Eastwood, 88, has been working in film and television for more than 60 years as an actor, director and producer. He has received film’s most prestigious awards, including four Oscars — two for Best Director — as well as three Golden Globes and five People’s Choice Awards, which includes Favorite All-Time Motion Picture Star in 1988.

Since 1967, Eastwood has run his own production company, Malpaso Productions, which has produced all but four of his American films, which include “Unforgiven,” (1992), “Million Dollar Baby” (2004) and and “Gran Torino” (2008).

After starring in the Western TV show “Rawhide,” Eastwood played the unnamed hero in Sergio Leone’s “Dollars” trilogy: “A Fistful of Dollars” (1964), “For a Few Dollars More” (1965) and “The Good, the Bad and the Ugly” (1966). All three spaghetti Westerns — so named because they were made in Italy — were released in the United States in 1967.

Though he had no name, Eastwood’s character was recognized for his iconic poncho, wide-brimmed hat, stubble and a well-chewed cigarillo. Since he was never officially named in any of the films, he is conventionally known as the Man with No Name.

The spaghetti Western trilogy not only launched his career in American cinema, in which he often played the roles of a deadly gunslinger, vengeful detective or a special agent, but also made Eastwood an enduring cultural icon of an American hero.

Dad’s favorite Eastwood film is “The Good, the Bad and the Ugly.” It was one of the first, if not the first, Eastwood movies he saw. He remembers seeing it the first time around 1980. He was in his early 20s, not yet a father.

“I liked his type of hero,” my dad told me. “He is kind of laid back, he makes wisecracks and he doesn’t attract attention. But push him too far, and he does what needs to be done.

Though critical reception of “The Good, the Bad and the Ugly,” also starring Lee Van Cleef and Eli Wallach, was mixed following its release, it is now seen as one of the greatest Western movies of all time.

My dad, not one to re-watch movies, likes to watch it on DVD every few years. As much as he is an Eastwood fan, he also loves the film’s score by Ennio Morricone, including its main theme that he remembers hearing on the radio when he was a boy. His favorite scene is the iconic Mexican standoff between Eastwood, Van Cleef and Wallach’s characters, which is accompanied by Morricone’s “The Trio.” (Dad also owns the movie’s soundtrack.)

Since I was a girl, I have put Clint Eastwood and my dad together in my mind. I think that link was made permanent when he bought a poster of Eastwood in a scene from “The Outlaw Josey Wales” (1976) at the Mall of America in Minnesota. I was 10 at the time. I remember admiring the black-and-white poster, which hung for most of my childhood next to his recliner in the basement.

So, of course, I wanted to give him a Clint Eastwood book on his day.

With “Clint Eastwood: Icon,” Frangioni, considered one of the most prolific Clint Eastwood collectors shares his curation — and his passion — with all Eastwood fans. The first edition was published in 2009. After nearly 10 years, and many more noteworthy additions to his collection, he decided it was time to update his book.

Of more than 10,000 items in his Eastwood collection, Frangioni said he is most proud of a trio of posters made for the Italian premiere of “The Good, the Bad and the Ugly” on Dec. 15, 1966. Each poster contains two panels, each of which depicts the three stars of the movie. Each poster is 9 feet tall and 3¼ feet wide.

“These posters are very ultra-rare,” said Frangioni, who paid about $30,000 for the posters. “They had never been seen other than at the premiere.”

Frangioni, who lives in Miami, is the founder of the Florida-based Frangioni Foundation, a nonprofit organization that runs a museum that showcases memorabilia from his Eastwood collection and his other passion: drums. He also is the author of “Crash: The World’s Greatest Drum Kits,” to be released Aug. 14.

Which of Eastwood’s movies is the collector’s favorite? He said it’s a tie between “The Good, the Bad and the Ugly” and “Dirty Harry” (1971).

When I told him the spaghetti Western also was my dad’s favorite, he replied: “He has great taste.”