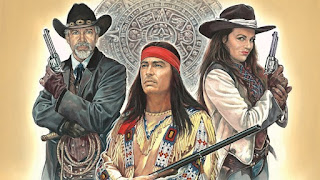 Bad Segeberg. His movie posters have been cult for decades - and his Karl May posters are in the homes of many fans. This year, Renato Casaro designed the poster for the Karl May Games for the 25th time. His motive: the new adventure "Winnetou and the Secret of the Felsenburg". The internationally renowned artist from Treviso in Italy is a world star in his industry. The Karl May Games are the only theater he paints throughout the globe.

Renato Casaro's first order from Bad Segeberg was in the 1993 season, the poster for the production "The Oil Prince". Since then he has paused only once (1995). 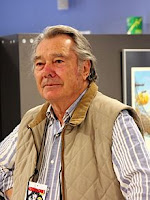 Renato Casaro worked at the plant for five weeks. The first pencil scribble became a little work of art that immediately captivates the beholder and also conveys the Mexican flair of the piece through its coloring. The focus is on Jan Sosniok (Winnetou), Christine Neubauer (Judith Silberstein) and Jochen Horst (Harry Melton). At the bottom of the picture you can see the imposing rock castle and the trek of the German emigrants, who are being carried away by Harry Melton and Judith Silberstein to a mine full of poisonous vapors.

The Karl May poster is printed in an edition of 20,000 copies and decorates in the coming months about 6000 advertising columns in Schleswig-Holstein, Hamburg, Lower Saxony and Mecklenburg-Western Pomerania. Premiere of the new adventure is on June 23. 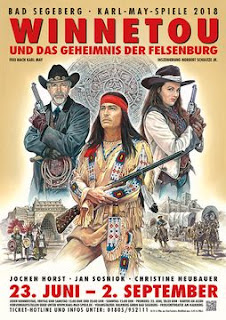