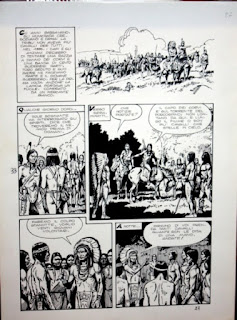 Destiny wanted Toro Seduto (Tatanka Iyotanka) to experience the most difficult era of the white conquest: the last. And that his name shone in the same constellation of legendary characters, such as George Armstrong Custer, Buffalo BIll, Phlltp Sherldan, Nelson A. Miles, George Crook, Red Cloud (Makhpiya-Luta), Crazy Horse (Tashunka Witko) and others maybe less suggestive, but equally important in the warp of the so-called American Epic. Perhaps this is why he is the most universally known Indian chief.

There is no American who ignores what Sitting Bull combined to the 7th Cavalry in 1876, and this explains the popularity of the inflexible head of the Sioux Unkpapa.

The people who consider themselves the least militaristic in the world, paradoxically, are extremely sensitive to military defeats. That the Sioux of Montana were assaulted without provocation by the armed forces of the Union, while they were peacefully enjoying a right recognized to them solemnly by the treaty of 1868, ceases to have relevance to the average American since they blatantly beat patent generals as Crook and Custer.