We continue our search for the filming locations for "The Big Gundown". After Cuchillo avoids capture by Corbett in the barber scene we see a wagon train of Mormons assembling in Willow Creek. After receiving insults from the towns people the wagon train moves on out of town. Right after Corbett arrives with a second horse and a body draped over the saddle. He rides up to the sheriff’s office who recognizes him and asks what bring him to town. Corbett tells him he’s brought in Cuchillo Sanchez, wanted for rape and murder. The sheriff looks at the corpse and tells Corbett that it’s not Cuchillo but Paco Molinas who looks much like Cuchillo. It seems Molinas had escaped jail the previous week after being found guilty and had been sentenced to hang. Disappointed Corbett tell the sheriff he’ll get a room at the hotel and will leave town the next morning. The sheriff tell him the hotel is closed but he cans sleep on the bunk in the jail or try the brothel down the street. Corbett chooses the brothel.

This scene was filmed at Colmenar Viejo. This town was seen in “For a Few Dollars More”, “The Good, the Bad and the Ugly” and many other Euro-westerns. It sits next to a Spanish military base. The set is now part of a cattle ranch but several foundations can be found in the berry patches that cover them and there is now a plaque and map showing what the set once looked like. 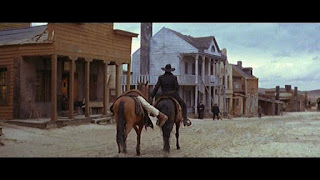 For a more detailed view of this site and other Spaghetti Western locations please visit my friend Yoshi Yasuda’s location site: http://y-yasuda.net/film-location.htm and Captain Douglas Film Locations http://www.western-locations-spain.com/
Posted by Tom B. at 6:40 AM