Who Are Those Composers ~ Giorgio Fabor 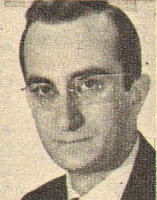 An Italian composer, sometimes also known as: Fabio Fabor, Georg Fabor, Jorge Fabor. He was born in Milan, Italy on April 24, 1920. Borgazzi graduated in composition and conducting from the Giuseppe Verdi Conservatory of Milan. He then worked as an organizer and consultant for important record companies and a collaborator of RAI-TV.

Since 1941 he was a member of the Siae (where he held important positions) as an author and composer of operas and symphonies, oratorios, cantatas and chamber music. Maestro Borgazzi had developed a vein of music for films, documentaries and theater, as well as the commentary on radio and television for numerous musical and lyric works created for theater, radio and television. He also composed over 500 songs and participated eight times at the Sanremo Festival. A graduate of the Giuseppe Verdi Conservatory of Milan, where he had taught composition, among his multi-faceted interests was electronic music, on which he held a series of conferences around Italy and at the Accademia Chigiana in Siena.