Once Upon a Time in the West at 50: how Ennio Morricone’s music powered a classic 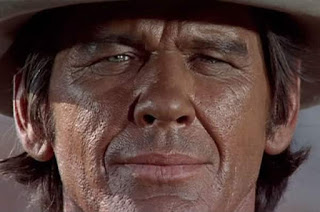 Has any piece of movie music more perfectly reflected the concept of ‘nemesis’ than Ennio Morricone‘s stunning, ominous ‘Man With A Harmonica’ theme?

As Charles Bronson’s vengeful loner pursues the murderous Frank in Sergio Leone’s 1968 masterpiece Once Upon a Time in The West, the composer’s explosive, powerful work conveys the solemn thrill of someone about to dispense bloody justice – and the creeping fear of a villain whose violent past is finally catching up with him.

It is, in short, the sonic embodiment of a reckoning.

Fifty years on, Morricone’s blistering, beautiful and spellbinding music for Once Upon a Time in The West has lost none of its potency.

A score that inspired a movie

Most films have their composers put music to images far into post-production. These days, temp tracks are common right until the last possible moment. But such was Leone’s faith in his collaboration with Morricone, which had already spawned the hit ‘Dollars’ trilogy, he had him compose the key themes before filming – and played the music during the shoot in order to inspire his cast.

What inspiration those actors must have received.

Morricone’s beautiful main theme for Once Upon a Time in the West, which first plays as Claudia Cardinale’s Jill arrives alone at the train station, perfectly captures and drives home the bittersweet essence of Leone’s film.

Edda Dell’Orso’s haunting operatic vocals, accompanied by shudder-inducing chimes and strings, are mournful and heart-breaking. They evoke a sense of boundless loss and longing.

But then the orchestra builds to a triumphant flourish as the camera rises to show us the expanding bustle of activity, and rise of civilisation, against the stunning, expansive backdrop of the Old West.

The marriage of music and visuals reflects the pioneer spirit of the shifting landscape, and Jill’s hope for a better life, but also the brutality and despair that ‘civilization’ is bringing with it. The coming railroad literally sends death out into the frontier in the shape of Henry Fonda’s ruthless enforcer, Frank, who guns down Jill’s new husband and his family in a bid to secure their land. Against this dichotomy, the music is unspeakably moving.

As for the aforementioned harmonica piece, it’s a visceral, exciting counterweight to the soaring main theme.

It almost always accompanies impending bloodshed or – at the very least – the threat of it. Cleverly integrating the character’s own playing into the score, it blurs the lines between the sound of the film’s reality, and our own as a viewing audience.

Almost all of the film’s principal characters are tragic in some way, and Morricone’s score reflects that. Through sorrowful music cues, it even finds room to make us feel some semblance of pity and empathy for corrupt railroad tycoon Morton – who dreamed of reaching the Ocean, but is left crawling helplessly towards a puddle with the sadistic Frank leering over him.

The sound of silence

There’s irony, of course, in the fact that no music whatsoever appears in the iconic, slow-burning opening sequence – save for Bronson’s spine-tingling burst of harmonica.

But the movie’s use of tense, suspenseful silence at key moments only makes the arrival of Morricone’s score more impactful. When the aforementioned harmonica breaks the air of stillness, it induces an eerie, foreboding thrill; as surprising for us as it is for Frank’s doomed henchmen.

The murder of McBain and his children, meanwhile, is another scene that uses the lack of sound quite deliberately to build tension before and during the terrible act itself.

The soundtrack surges to life only as Frank’s posse themselves emerge from their hiding places once the deed is done. Again, it is scintillating.

As if to sum up Morricone’s contribution, Bronson’s quiet, watchful character speaks only sparely – preferring to let his harmonica (and Bronson’s brilliantly craggy yet expressive features) do the talking.

Harmonica’s simmering emotions under a cool, collected exterior, and the question of just how Frank wronged him, are resolved in cathartic fashion at the film’s end. In a reversal of the opening scene, his vengeance theme plays once more for a harrowing, revelatory flashback, before we suddenly snap to music-free silence for the showdown’s pay off.

Morricone’s score for Once Upon a Time in The West may not be as ingrained in popular culture as his music for The Good, The Bad and The Ugly, or the other ‘Dollars’ films for that matter.

But the film is arguably the greatest of Sergio Leone’s ‘spaghetti westerns’: profound, emotional, and thematically rich, as well as being atmospheric, captivating of vision, and – above all else – majestic of music.

It is the culmination of Leone’s immersion in the violence and wonder of the American West, and of Morricone’s musical imagining of that backdrop.

Now 89, Morricone is still producing great music. But even among a career of celebrated highs, 50 years on Once Upon a Time in the West stands as his opus. An unparalleled driving force of the images and story it serves.