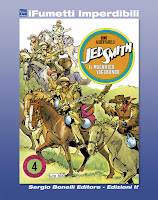 Issue #4 was about the life and legend of Jed Smith

Among the most fascinating figures of the Far West epic is that of the trapper. A professional hunter, he traveled through the still-civilized regions of North America in search of virgin hunting grounds, rich in beavers and other animals, whose fine furs were exported to Europe.

Jedediah Smith is one of the most famous mountaineers in the history of the West and part of his fame is due to the discovery, during his hunts, of a pass in the southern part of the Rocky Mountains. Although not a pioneer by profession, Jed ended up paving the way to the land colonization of the vast regions extending west of the imposing mountain range, previously considered impassable.

That of Jed and his companions was certainly not an easy life. In addition to dealing daily with the dangers of unspoiled and wild nature, these rude men had to deal with "gangs" of rival hunters, often linked to large companies engaged in the leather trade. And, above all, they constituted the "avant-gardes" of white men who came into contact with the Native American populations, not always peaceful and not always well disposed towards "the invader".

A rich and adventurous life like a novel that of Jed Smith, which the author tells with a large amount of historically documented facts as is characteristic of this series, The Protagonists, published in 1974 by the Editorial Daim Press (today Sergio Bonelli Editore) . Ten volumes entirely written and designed (including covers) by Rino Albertarelli and dedicated to as many mythical characters of the Far West.