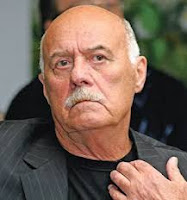 Stanislav Govorukhin an actor, celebrated film director, screenwriter and political figure, died on June 14, 2018 in Barvkha, Moscow, Russia after a long illness, as reported in Russian media. He was 82 years old. At the time of his death he was a deputy in the State Duma from the United Russia Party. Born in Berezniki, Russia on March 29, 1936 Stanislav directed and wrote the screenplay for the Russian TV film “The Adventures of Tom Sawyer and Huckleberry Finn” (1981) and directed the 2001 film “Mark Twain’s Tom Sawyer”.
Posted by Tom B. at 6:51 AM