We continue our search for the filming locations for "The Big Gundown". At the brothel he takes a bed with a buxom blonde who loves to talk. She tells him yesterday she had a Mexican and the more she talks Corbett determines he was Cuchillo. She is wearing a star, Corbett’s star, on her garter. She tells Corbett the Mexican left with the Mormons. Corbett takes the star and leaves her empty handed as he leaves to pursue his quest to catch the wanted outlaw. 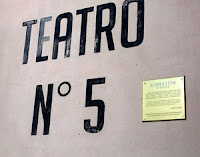 This scene was filmed at a Cinecitta  sound stage in Rome, Italy.