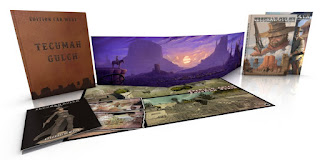 The Far West French edition is a new edition of Cedric B.'s book published in 2010 on demand at Studio 09. Our ambition is to publish, thanks to you, a new prestigious edition, printed and distributed in the shops' network. specialized.

This new version is a revised compilation, reorganized and reread previous texts of the basic book and some supplements to propose a mode sandbox more centered on the city of Tecumah Gulch and its region, proposing dozens of places and ideas scenarios. All the text redesign work was done by Jérémie Coget and Batronoban.

The rules have also evolved to take into account the particularities of the western genre (Fixed Defense and Fixed Resistance dividing by 2 the number of dice rolls in combat, Health Points, Poker Dice that can target and increase damage. undergone, dueling system ....) so that the fights are faster and more deadly!

Graphically, the game is completely remastered and original illustrations are made by Nicolas Dujols, Vincent Laïk and Kahouet.

Finally, the campaign "Legends of Arizona" Cédric B. and the scenarios offered as a gift are completely new.

As a reminder, here is the grog sheet of the 1st edition.

Tecumah Gulch portrays the Wild West as it was forged by legend, and especially by the great westerns: fantastic rides in dazzling landscapes, oppositions between characters with strong characters, confrontation with the wilderness, justice carried out with ropes and revolvers ...

Enjoy adventures worthy of the best movies of Sergio Leone, Rio Bravo, The Seven Mercenaries or even Dance with the Wolves and Django Unchained, thanks to Tecumah Gulch: Far West Edition, its sandbox game frame and its system of fluid game.