Italian actor Aldo Canti, better known to Spaghetti western fans as Nick Jordan was born in Italy in 1941. He was a stuntman and character actor. He appeared in over two dozen films during his career from 1961 to 1980 and is best remember for his appearances in “Sabata” (1969) as Indio and “Return of Sabata” (1991) as Angel.

In his free time Canti was an organizer of clandestine gambling dens also linked to the Band of Magliana. He apparently had let a few of his patrons run up a sizable debt. He made arrangements to meet them at Rome's Villa Borghese Park on January 21, 1990. He was found shot in the head in Rome at the Villa Borghese Trolley the following morning. During the investigation that followed it was established that he was killed by two people he knew, and who had a gambling debt with him but the killers were never found. 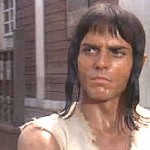