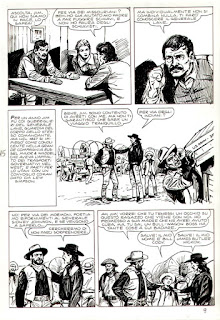 Hickok earned a great deal of notoriety in his own time, much of it bolstered by the many outlandish - often fabricated - tales he told about his life. Some contemporary reports of his exploits are known to be fictitious but, along with his own stories, remain the basis for much of his fame and reputation. Hickok was born and raised on a farm in northern Illinois, at a time when lawlessness and he fought and spied for the Union Army during the American Civil War and gained publicity after the war as a scout, marksman, actor, and professional gambler. Over the course of his life, he was involved in several notable shootouts, in 1876, Hickok was shot from behind and killed while playing poker in a saloon in Deadwood, Dakota Territory, by Jack McCall, an unsuccessful gambler. The hand of cards which he held at the time of his death has become known as the dead man’s hand. Hickok remains a figure in frontier history. His father was said to have used the house, now demolished. He was the fourth of six children, William Hickok died in 1852, when James was 15. Hickok was a shot from a young age and was recognized locally as an outstanding marksman with a pistol. Photographs of Hickok appear to depict dark hair, but all contemporaneous descriptions affirm that it was red, in 1855, at age 18, James Hickok fled Illinois following a fight with Charles Hudson, during which both fell into a canal. Hickok moved to Leavenworth in the Kansas Territory, where he joined General Jim Lanes Free State Army, a vigilante group active in the new territory. While a Jayhawker, he met 12-year-old William Cody, who despite his youth served as a scout just two years later for the U. S. Army during the Utah War. While in Nebraska, James Hickok was derisively referred to as Duck Bill for his long nose and he grew a moustache following the McCanles incident and in 1861 began calling himself Wild Bill. He was also known before 1861 by Jayhawkers as Shanghai Bill because of his height, Hickok used the name William Hickok from 1858 and William Haycock during the Civil War. He was arrested using the name Haycock in 1865. He afterward resumed using his name, James Hickok. Most newspapers referred to him as William Haycock until 1869, military records after 1865 list him as Hickok but note that he was also known as Haycock. In 1857, Hickok claimed a 160-acre tract in Johnson County, on March 22,1858, he was elected one of the first four constables of Monticello Township