We continue our search for the filming locations for “Bullets Don’t Argue”. After his escape Billy rides away from Garrett and his brother George across the desert sand dunes. He’s spotted by Santero and his men who chase him in hot pursuit believing he has the money stolen in the bank hold-up. Billy is shot from his horse and then Santero throws a knife in his back after he tries to put up a fight. When Santero reaches in the sack for the money he finds only rocks. He tells his men they will follow the sheriff and wait for an opportune time to attack them.

This scene was shot in the dunes of Cabo de Gato. These are the same dunes seen in “The Good, the Bad and the Ugly”. 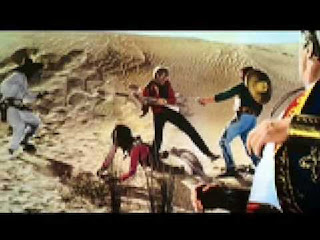