Babylon Apartments in Miami, one of Arquitectonica’s first designs, is at risk

With its bright red, ziggurat form, one of Miami-based architecture firm Arquitectonica’s first buildings, the Babylon Apartments in Miami’s Brickell neighborhood, is at risk of demolition if its longtime owner, a former “spaghetti western” movie star, gets his way. The six story building is an icon of subtropical postmodernist architecture in Miami; it’s also one of the signatures of the city’s ‘Miami Vice’-era 1980s comeback. The Babylon also earned Arquitectonica its first international award, a Progressive Architecture Citation Award, only a few years after the firm’s founding in 1977.

Although the Babylon is thirty four years old, well below the typical fifty year cutoff for historic designation, the City of Miami’s Historic Preservation board is considering the fate of the iconic structure on the grounds that it demonstrates “exceptional importance.” A final draft historic designation report was publicly released last Friday, and will be considered by the board on July 5th.

When the news became public earlier this year, a flurry of press, including articles by myself, raised public awareness of the potential to lose the Babylon. A change.org petition was started. The modernism preservation group DoCoMoMo rallied for its preservation, planning an event. 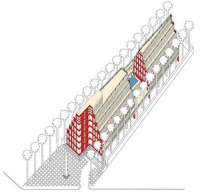 Arquitectonica designed the Babylon in 1979, at the same time as the much larger Palace Condominium on the other end of Brickell Bay Drive, in Miami, although the Babylon wasn’t built until 1982. “It was one of our first buildings; our first building that’s not a house” said Bernardo Fort-Brescia, a principal at Arquitectonica, to a recent gathering of University of Miami students. His wife and business partner Laurinda was the main designer of the building. Fort-Brescia added “it hasn’t been kept up that well over the years.” 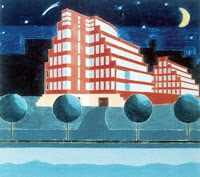 Indeed, the building’s owner was about to obtain a demolition permit for the site in hopes of constructing a much taller building when, on May 3rd, historic preservation board member Lynn Lewis requested a report from city staff on the potential for designation. This set a 120 day moratorium on demolition. Francisco “Paco” Martinez Celeiro, also known as George Martin from his days starring in “spaghetti western” films in the 1960s, has owned the Babylon since 1989. He has been trying for the last two years to demolish the building and get the sliver of land underneath it zoned for a 48 story structure. Up until recently, it was at least partially occupied, although according to neighbors nobody has been seen inside lately.

Amid all of this, the usually outspoken Fort-Brescia and wife Laurinda have declined to give their own opinions on the question of preservation itself. “I shouldn’t talk about the Babylon being demolished because I’m not the one to talk about that” Fort-Brescia told the UM class, as well as when I called.

Architect Andres Duany, a former principal at Arquitectonica and founder of Duany Plater-Zyberk, was much more outspoken. “Arquitectonica is the most important firm in Miami, probably in the Caribbean, possibly in the southeastern United States, in the last 50 years—since Morris Lapidus,” Duany told the Miami Herald. “If they were to demolish this building, it would be an act of cultural barbarism. Completely beneath the artistic reputation that Miami thinks it has. And it would betray that we are nothing but a bunch of swamp-dwelling barbarians. Still.”