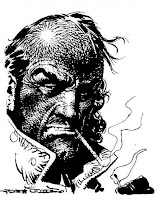 A post-apocalyptic series, Hombre is set on Earth after the collapse of the technological civilization. The protagonist moves through the scenery as a disillusioned solitary survivor, with lingering traces of humanity despite the widespread debased nature of most people he encounters. He always has a ragged cigarette in the corner of his mouth, and is often accompanied by a young woman who came of age after the collapse and thus is accommodated to the life of a naked savage. Though the plot is compared with that of Jeremiah, Hombre does not share the underlying motif of hope and survival of mankind of the former.

Hombre is a Spanish comics series written by Antonio Segura and drawn by José Ortiz, first published in 1981 in the magazine Cimoc. After its initial run in Cimoc, Segura and Ortiz brought Hombre to the magazine KO Comics, one of the three magazines the artists' publishing cooperative Metropol produced during its short existence in 1984. After Metropol ceased business, Hombre relocated to the pages of Cimoc for a second run. The Spanish album releases were published by Norma Editorial.

Enjoying popularity in France, the series was printed in albums by publishers Kesselring, Magic Strip and Soleil Productions. English language translations of the series appeared in Heavy Metal during the 1980s and 1990s. In Italy, it appeared starting from 1982 in the magazine Lanciostory.

Antonio Segura was born on June 13, 1947 in Valencia, Spain. His earliest work appeared in the early 1980s after meeting the experienced artists José Ortiz, Luis Bermejo and Leopoldo Sanchez who were looking for a scriptwriter untainted by the industry. Taking this opportunity, he wrote a series for each of them Hombre, Orka and Bogey, respectively. With some effort, these became published, and joined in the wave of emerging Spanish adult comics that bloomed in the post-Franco era. Hombre began a successful run in the magazine Cimoc, and Segura started collaborating with Jordi Bernet, creating the amazone fantasy series Sarvan, also appearing in Cimoc.

In 1983, Segura and a collective of artists including Bernet, Ortiz, Sánchez and Manfred Sommer, made an attempt to establish a monthly comics periodical, on the premise of artists' freedom. It was named Metropol and bore the tag "Papeles falaces urbanos y criminales" (Deceptive, Urban and Criminal Characters/Pages). Several of Segura's series were featured, among them Morgan with Ortiz, and Kraken with Bernet. The latter was staged in a dystopic city, also named Metropol, above the sewers where the series' monster, the Kraken, dwelled. The magazine was published for a total of 12 issues.

Later, Segura continued his prolific partnership with José Ortiz, resulting in a large body of work, including Las Mil Caras de Jack el Destripador (The Thousand Faces of Jack the Ripper), and the humorous sci-fi series Burton & Cyb. In the early 1990s, he started the series Eva Medusa with Ana Miralles, a work which won two Haxtur Awards. In the most recent years, Segura has worked for the Italian comics market, creating two episodes of Magico Vento and new stories for the character Tex Willer.

José Ortiz Moya (1 September 1932 – 23 December 2013) was a Spanish comics artist, best known for several collaborations with Antonio Segura, such as the series Hombre.

José Ortiz Moya was born in Cartagena, in the Region of Murcia on September 1, 1932

His career began at an early age, winning an artistic tournament held by the Spanish magazine Chicos. After a period of making pocket sized comics, he created the series Sigur el Vikingo and Johnny Fogata in 1959, and Carolynn Baker for the English newspaper Daily Express in 1962.

Ortiz joined Warren Publishing in 1974 due to his connections with the Valencia studio of Selecciones Illustrada. He would remain with Warren until 1983 and drew more stories for that company (approximately 120) than any other artist. His work included the series Apocalypse, Night of the Jackass and Coffin in Eerie, as well as Pantha in Vampirella and numerous stand alone stories. Ortiz would also draw Vampirella herself in issues 35 and 36 that title. He won the award for 'Best All Around Artist' at Warren in 1974.
A sample of Jose Ortiz's work, from Eerie #65.

Following this period in the U.S. comics industry making horror comics, he returned to Spain and formed a lasting and fertile working partnership with Antonio Segura in 1981, initiated by the serial publication of Hombre, a post-apocalyptic saga, in the magazine Cimoc.

By 1983, Ortiz and Segura joined with several other artists including Leopold Sánchez, Manfred Sommer and Jordi Bernet, to form the short-lived publishing house Metropol with the artists' interest in mind, responsible for three comics magazines, Metropol, Mocambo and KO cómics.

During the 1980s Ortiz also produced work for a number of British publications including The Tower King and The House of Daemon for Eagle and The Thirteenth Floor for Scream!. He then moved over to 2000 AD in 1984 where he contributed to a number of stories with most work on Rogue Trooper.

In addition to the continued run of Hombre, Ortiz and Segura created Ives and Las Mil Caras de Jack el Destripador (The Thousand Faces of Jack the Ripper) the following years, later renaming Ives to Morgan. In 1987, they began the humorous sci-fi series Burton & Cyb, followed in 1990 by the series Juan el Largo.