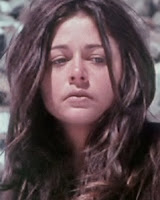 Spanish actress and director Emma Cohen passed away from cancer at her home in Ciudad Santo Domingo, Madrid, Madrid, Spain. She was 69. Cohen studied to be a lawyer in Barcelona because it was her parent’s wishes. When she discovered the theater and began reading the classics she changed her mind and became an actress. She went on to appear in over 80 films and TV appearances as well as being a screenwriter and director. She was the widow of director Fernando Fernán Gómez [1921-2007]. Emma appeared in three Euro-westerns: The Legend of Frenchie King 1971 as Virginie, Cut-Throats Nine 1972 as Sarah Brown and Cipolla Colt (aka Spaghetti Western) 1975 as Mary Ann Pulitzer.
Posted by Tom B. at 4:35 PM