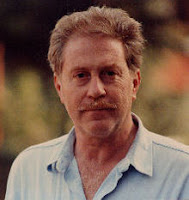 Italian director, screenwriter and film producer Vittorio Salerno has died in Morlupo, Italy a suburb of Rome on July 5th. He was 79. The youngest of four brothers, all artists: Titta, painter and art critic, Enrico Maria , actor and director, Ferdinand, musician and songwriter.  He studied classical guitar with teachers Miguel Ablóniz and Andrés Segovia to ' Chigiana Academy of Siena. He wrote screenplays for four Euro-westerns: Blood at Sundown (1966), Dead Men Don’t Count, $20,000 for Seven (both 1968) and Fast Hand is Still My Name (1973). As a writer he has published several books, among them Enrico Maria Salerno, my brother dedicated to the famous actor brother, published in 2002 by Gremese. In more recent years he has produced and directed dozens of historical cultural programs for RAI. The announcement was made by actress Martine Borchard on her Facebook page.
Posted by Tom B. at 8:13 PM