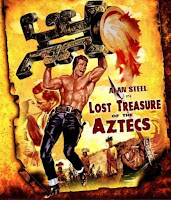 English dubbed over a fabulous Italian print but as there isn’t a complete soundtrack available in English so some of it is still in Italian with English subs added.

I watched this against my old red English copy from 1970 and concluded that the entire English track was used in this new version. I can now get rid of that old TV copy. I then compared this new version with my Italian copy and found that they are the same length but the newer one is much better in quality.  Plus it is in a wider screen format than my Italian copy. However, the credits in my TV copy are different so I am keeping those and I have an English B&W trailer and a color Italian trailer so I’ll put those 3 items on a separate DVD and keep them.

This movie was made at the end of the peplum cycle but is actually a Western. In the last two minutes of the movie, Alan Steel takes his shirt off, and acts like a Hercules character and defeats the Inca/Aztecs and destroys their temple, thus all the Samson, Hercules titles.

After the Spanish conquered the Aztecs in the 1500s a small group of Aztecs escaped north to Arizona with a vast gold treasure.  This “last tribe” built a “hidden city” in “the great stone
desert” where they existed in peace until a “lost map” leads all the local western folk on a treasure hunt.  The evil group, led by Mario Petri, (the town boss), arrive at the city first before Alan Steel’s group of good guys.  They arrive at a rock face with two golden doors which magically open. How is that a hidden city? Anyone could find that place, without hardly trying.

After the two groups destroy each other and run out of bullets the Aztecs start picking the remainder off with arrows. They cleverly use the shadow of an Aztec warrior on a wall as they fire their arrows.
Once Mario Petri finally gets his hands on the gold, his mind snaps, and he kills the remainder of his group. He then just stands there helpless.
With Alan Steel and three of his friends remaining, the Aztecs decide to sacrifice them by throwing them into a river of molten gold.  Alan shouts “Me first” and then proceeds to beat the Aztecs and tear down their city just as an earthquake strikes.  Within seconds the remaining Westerners ride out of the golden doors to safety. 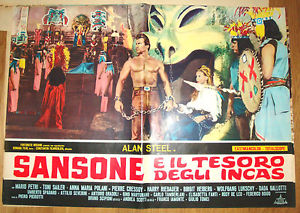 The MASK seen here was originally used in an Ed Fury URSUS movie.
Toni Sailer falls in love with the Aztec princess and they live happily ever after.
Aside from the obvious confusion as to where this movie fits in, there are a lot of other interesting quirks here and there. In a non-English scene, they call the Queen “Inca” which might account for the title confusion. The Aztecs were centered in what is today, Mexico City while the Incas were in Peru. In another cut English scene, two cowboys say, “I can smell a woman 10 miles away”,  a scene which was obviously cut for the TV version.