Spaghetti Western Trivia ~ The White, the Yellow, the Black 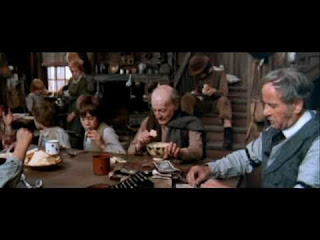 The Italian soundtrack version of the film gives viewers a better hint at the spoof to come. During her opening tirade, Clementine Gideon played by María Isbert, wife of Sheriff Edward ‘Black Jack’ Gideon played by Eli Wallach, drops the names of several of the most famous Spaghetti western films, including all four made by Sergio Leone. The film titles were omitted from the English dubbed version.
Clementine: [Opening lines from Italian version] For a fistful of dollars. For a miserable fistful of dollars that are not even already your share! At least I did that for a few dollars more... but "vamos a matar", compañeros! Always around in the good, the bad and the ugly times! Head down, dear; you're at the day of reckoning, now!

Watch the clip below and see how many Italian titles you recognize during her diatribe on her poor husband.