Countdown to the expected appointment in Burgos with the 'spaghetti western' 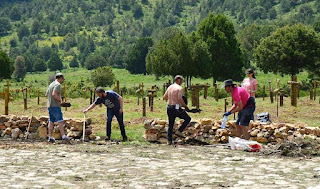 The grand party in honor of 'The Good, the Bad and the Ugly' of Sergio Leone becomes a comprehensive program of events between July 20 and 24.

The cultural association 'Sad Hill', formed by film fans residents in the Sierra de la Demanda, will hold in July several main events of the 50th anniversary of the shooting of the legendary film The Good, the Bad and the Ugly, one of the best known spaghetti westerns of all time by director Sergio Leone, which featured actors Clint Eastwood, Lee Van Cleef and Eli Wallach as the main protagonists.

It is that time for the most anticipated film lovers of Leone, which has just made public the program of events that will be part of this tribute. All of this has been achieved after several years of making this great, for example, reconstructing some of the scenes of the film at the legendary cemetery where the final duel between the three main characters, located in the valley of Mirandilla of Santo Domingo.

Already There has been reconstructed many of the graves this past weekend achieving a regression to the past. Something that may be discovered in mid-July at the opening of the program that has been organized by the association, and then will be part of the tourist itinerary to be completed with other scenes from the film. Among them, the strong Union prison camp Betterville, in Carazo, the place where Tuco and Manco are imprisoned; the interiors of the Monastery of San Pedro de Arlanza, being the place where Manco recovered from his burns and the Arlanza river itself, chosen to give life to the battle between Unionists and Confederates which became the Rio Grande.

"At the end of 2015 we started the restoration in the central part of Sad Hill Cemetery". Everything will be ready for the celebration and will provide all the moviegoers-and this film in particular, a program of events that allows us to again enjoy reminiscing about the adventures of Manco, Tuco and Sentenza for those Burgaleses disguised locations, where 50 years later the wild “American West” is explained.

The events begin on July 20 and conclude on Sunday the 24th with a final celebration at the cemetery itself Sad Hill. Linked to the film as many as 20 acts on the same day, the simultaneous screening of The Good, the Bad and the Ugly in Covarrubias, Santo Domingo de Silos and Salas de los Infantes. On Thursday 21 the exhibition will show sketches and original designs of the architect and artistic director of the film, Carlos Simi, parallel to the conference the wife and daughter of Simi will open the exhibit, responsible for spreading the heritage of the director. On Friday 22nd will continue with a new talk on Sergio Leone by film historian and novelist Carlos Aguilar.

The most important events of the 50th anniversary of the shooting will come with the weekend of tension. After the official opening on Saturday the restoration Sad Hill Cemetery with institutional events, with the presence of mayors and a tour of the site with explanations of the techniques used to reconstruct the cemetery, the afternoon will give way to two major conferences with leading experts: Sergio Leone's biographer Christopher Frayling, and the New Zealand film researcher, Peter J. Hanley.

In addition to the tribute to three people with great links with the film: Eugenio Alabiso, Italian technician in charge of editing the film; José Antonio Pérez Giner, production manager and Burgos location set locator, and actor Antonio Ruiz Escano.

On Sunday the 24th from 3:00 p.m. and open to all PG, will take place in the cemetery itself Sad Hill a play, a concert of the band 'Alfoz de Lara', with themes of the soundtrack and other pieces of film composer Ennio Morricone and the projection on a giant screen the film in the Spanish version. During the day there will be made available to the public several buses to travel to the cemetery, then a termination of the official anniversary symposium will be made.