We continue our search for the filming locations for “Bullets Don’t Argue”. The following day Garret, George and Billy continue on their march through the desert to the Texas border. George asks Pat for some water and when he’s finished George pours the rest of the canteen onto the sand below. The three continue on, now with no water, George challenges Garrett to a fight after he bad mouths Pat’s choice of Martha Coogan for his wife. When Billy wins the struggle he points Pat’s gun at him and tells him he’s going to kill him but Pat walks slowly to his horse and removes his rifle. When Billy pulls the trigger he finds the gun empty and Pat once again gains control.

This scene was shot in the Sierra Alhamilla. 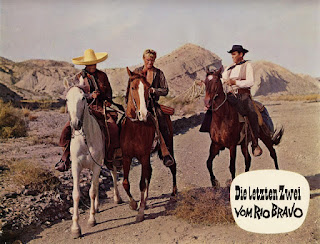