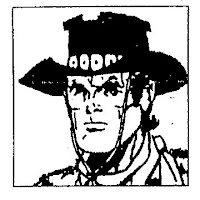 Verdugo Ranch was a 1957 comic book series written by Héctor G. Oesterheld and illustrated by Hugo Pratt. Italian publisher Sergio Bonelli made his debut as a scriptwriter in 1957, with the translation into Italian of the Spanish series, for which he wrote the final episode (artwork by Franco Bignotti).

Since the first issue of FRONTERA (April 1957) this series was developed with HGO scripts under the pseudonym H. Sturgiss, and drawings of Ivo Pavone.

Dundee Ross, son of the executioner of Santee, goes to a western town to take over the ranch that his father left him, "Soga" Dundee, who died in unclear circumstances.

Once at the ranch Ross intends to put into operation: what is unimaginable in that it will be run with the help of ex-convicts. His father has not really died, and has carried out a unique method of struggle against capital punishment; with the complicity of doctors and undertakers he has managed to save many unjustly convicted men.

Before learning of this Ross has known Henry West and "The Coyotero" both highly recommended men, which are the first to help in the operation of the ranch. Then his own father, who continues his crusade and profession with the help of other people under an assumed name, provides Ross with more personal. The series concludes in the #12 BORDER (March 1958), after many other chapters totaling 195 pages. 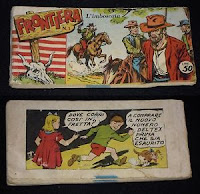 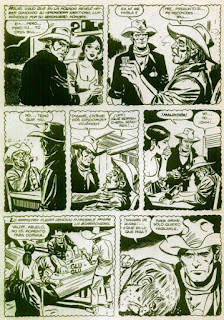 Héctor Germán Oesterheld was born on July 23, 1919 in Buenos Aires, Argentina. He was also known as his common abbreviation HGO, was an Argentine journalist and writer of graphic novels and comics. He has come to be celebrated as a master in his field.

Oesterheld worked with artists including Hugo Pratt, Alberto Breccia, Francisco Solano López, Ivo Pavone, Dino Battaglia, as well as Horacio Altuna, José Massaroli, Eugenio Zoppi, Paul Campani, Gustavo Trigo, Julio Schiaffino and others. El Eternauta remains one of the key literary works of Argentine culture; it is constantly reprinted for new audiences. His works are being reprinted in Argentina and around the world.

Through his comics, he criticized the Argentine military dictatorship. During the Dirty War, he and his daughters joined the Montoneros, a leftist guerrilla group that opposed the military junta. He continued to publish works from secret locations, but was kidnapped and disappeared in 1977. His daughters were arrested and disappeared, as were his sons-in-law.

Hugo Eugenio Pratt was born on June 15, 1927 in Rimini, Italy – August 20, 1995) was an Italian comic book creator who was known for combining strong storytelling with extensive

historical research on works such as Corto Maltese.

In the late 1940s, he moved to Buenos Aires where he worked for Argentine publisher Editorial Abril and met Argentine comics artists like José Luis Salinas, Alberto Breccia and Solano López. The passage to Editorial Frontera saw the publication of some of his most important early series. These included Junglemen (written by Ongaro), Sgt. Kirk, Ernie Pike and Ticonderoga. They were all written by Héctor Germán Oesterheld, one of the major writers of Argentine and perhaps world comics. Pratt taught drawing in the Escuela Panamericana de Arte directed by Enrique Lipszyc. He often travelled to South American destinations like the Amazon and Mato Grosso. During that period he produced his first comic book as a complete author, both writing and illustrating Anna della jungla (Ann of the Jungle), which was followed by the similar Capitan Cormorant and Wheeling. The latter was completed after his return to Italy.