INTERVIEW WITH FEMI BENUSSI (by La Stampa on 14 November 1977) 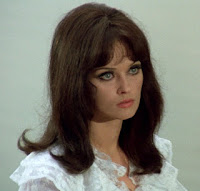 \
Without a shadow of doubt she has been, and still is, one of the most elusive figures of Italian cinema. Not that she is the only case, but here we are talking about an actress who in her career has participated in more than 80 films. Femi Benussi was for Italian cinema one of the undisputed icons of the sex comedy. We find her name in evidence on many movie posters during the first half of the 1970s. And with all that she did not go unnoticed, around this figure there's always been an aura of mystery about her to date we know well little. She moved away from the scene in the early '80s, very quietly. Her departure was gradual, with her participation in movies over time became more and more sporadic. Even though she took this regrettable course she would not to be forgotten. She became part of the collective imagination of many men who adored her and where she became one of the undisputed queens and to other spectators who have been added over time to those that have discovered her later, either by TV programming, videos or DVD and through that work of re-evaluation of a film it was really hard for her to completely disappear. Especially since today, through new technology we have access to her content and documents that were previously objectively more difficult to find. If you have the urge to try and the patience to do it, the web is an endless source of news, well hidden by its vastness, just waiting to be given in evidence. And when that happens sometimes you find yourself in front of the documents, as the article published here, as well as having their undoubted charm and cinephile value report with those now gone.

The interview in question was issued by Eufemia on Monday, November 14, 1977 for the newspaper La Stampa and was taken from its online store. I do not deny that as long as I'm not aware I believed that it was not the only one granted by Femi as there was the one released by Franco Grattarola for the magazine Cine70 December 29 2001. This was made when the actress's film career was over by about 18 years and apparently it was not easy for the interviewer to convince her to give it. The beautiful Istrian actress tried to retrace her entire career. Of many films to which she lent her face and especially her sex comedies, but said she did not have more memory of her career, it seemed as if she had deliberately removed them from her memory, emphasizing that she remembered little from her vast film career and did not recall anything, as the movies were not worthy. A severity of herself was tied to a sense of dissatisfaction, which seemed to hide her regrets. Of course, mere conjecture, her character is so introverted and elusive that the idea that one tries to make her return to a strongly idealized image is not allowed to figure out who really is Femi Benussi.

In the answers, transcribed below, the actress to one of the questions of the journalist of La Stampa says of "On the screen the image that they want to offer the audience, but it's not my ... my ... body .. . it is in contradiction with my spirit ... " nothing more true and sincere, has given us the vision of her body but not her soul.

As previously mentioned, in the interview granted to Cine70 she declares that during her career she did not save anything, but in both the interviews highlights with pride, contradicting the fact that she had been directed by Giuseppe De Santis. She says this when the interviewer seems more interested in her sexy performances, while in the other when she says that it was the director who had been able to appreciate her more. The film in question was to really secure her professional future. Her work behind the camera was for the last time, after eight years away from the set by a neorealist director. The film was not as successful as hoped, and certainly for the actress was a missed opportunity.

Finally, although they would still have many things to say, as you will read in the interview she declares she moved to Rome and consequently entered the film world in pursuit of a man she was in love with, in the interview given in 2001 she fails to mention this anecdote by saying that it was the theater that lead her to the eternal city. Obviously, one thing does not exclude the other and draws attention to simple curiosity.

Below you will find the original cutout of the interview taken by the newspaper, to facilitate the reading immediately after it is also published the transcript of the same ... 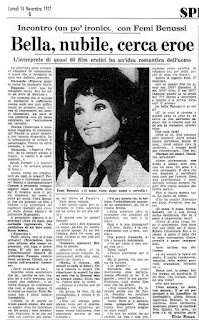 The interviews are wrong about the knowledge of the occasion. Unless they played on well-defined concrete themes. Question: "Madam, how much meat did you ate yesterday?". Answer: "Yesterday I did not eat meat. Yesterday I read a book by Moravia." A reporter who deals with shows is sufficiently a snob for dwelling on mundane meals. The idea of ​​an interest in food, even by a celebrity, doe not even pass through the antechamber of the brain. Because the interview is wrong for the occasion to gain knowledge?  Because within minutes, and dispersive technique, he has the presumption to reveal the character. As another example, in case. Question: "Madam Ferrati, you have always loved the theater ... theater is the component ...." Sarah Ferrati: "The theater? I loved it and I always loved boxing." Alas, how I will behave from now on? Character or specific questions? Reality or imagination? Or it is prudent (perhaps wise) to be halfway?

Meanwhile, here I am, under the eyes of Femi Benussi, who is making a film in Turin, " Le avventure del ragionier Galletti alla ricerca della donna ideale," directed by Salvatore Bugnatelli. By the way, Mrs. or Miss? (Not bad, a reasonable curiosity, the acquisition of a real fact. Good start). "Miss." However! So, you never married? (Bravissimo. Dig around the same topic, with enthusiasm and irreverence. And 'more than fair. The other party will remain disoriented. They can obtain surprises. Who knows, a lover in the closet! Insist). "Definitely not". It would be like admitting that she ... because if I'm not mistaken she is in her thirties, plus forward and reverse ... and it would therefore have to confess that one has not been able to find a husband. Femi Benussi was not capable. Unbelievable. "Look. I could find husbands, as many as I want. But I do not want one. I do not care. I had my love. Rather, you know that in 1964 I was the youngest actress of the Rijeka theater?. But without a husband. "But I left everything to move to Rome following a man to whom I was in love." And why did you not marry? Because? "Not all flirting flows into the wedding, even a child will explain. It was a beautiful love which lasted three months and then it stopped. Meanwhile my life was changed". Duped in love. "Of course not she mocked. We parted without tragedies. An inconvenience of life. In fact, I left for Rome." (In Rome, beckoned the cinema ... come on, take the plunge). Where I discovered the cinema. Excuse me. I mean: she revealed. "But in films I did not succeed." She shot 60 films, starring in 25, and yet she criticizes the cinema? "I did not feel good enough for film. I thought that actresses had to be beautiful. I was ignorant of my colleagues." (The beauty probably hides a complex). Ah, she feels bad. "On the screen the image they want to offer the audience is not mine." What is your view? "My physical ... ... it is in contradiction with my ... spirit." A terrible war. She will have sore muscles. "A little 'all over my body." Everything, Everything? "Well except my breasts." Well, legs, etc., are not to be used in this away. "Legs?. Let me find a lot of things in her perfectly efficient body. And legs ... honors her legs. Rather, all these sexy film that she shot ... "I do not exaggerate. I also worked with De Santis. Pasolini sent me the script for “Uccellacci uccellini” Sure. But it is always, how to explain?, donated much. I could choose other roles? "I have no choice, I agreed. Mine is a profession not like any other. If I refused it was for money, because the pay was low." Then they pay well. The role was sought. "You know how many films I shot in 1975? Fifteen. And in 1976? Eight. And in 1977?

Guess how many I shot in '77? We are in November and this is the first. You understand? The first". The beautiful Benussi is in crisis? "It is a blow to the film and then I have a crisis. If by the end of the year I understand that cinema does not give me more to eat, and it changes lives." What will you do? "I do not know. I know of other crafts. I could be a good housewife ... I wanted to be a writer ... it's too late to start over ... I do not know". Let's move on to the love? "I am disenchanted, I do not think about anything, I live alone with a dog. A dog is my partner. And to say that I was willing to sacrifice everything for love. I am a sentimentalist. The sentimental always remain screwed. Now I want to get across. "We do this wrong. I speak as a man. "What did you understand? Become tougher. Take, not give". She is a very desirable woman. For her, sex is important, right? "It is by far after the sentiment. I would never go crazy for sex. Refusal for adventure  is an end in itself. Apart from the fact that I'm monogamous. Heart, brain and sex: inseparable. "She will have her own idea of a ​​man. "I missed the father figure. And I want the man-hero, male, strong, noble, generous, proud, romantic .... " And tell me: had she found it, at least once? "No not yet". Trust, Miss Benussi, life goes on. I am absolutely certain, something, soon, will happen. Do not despair. A hero ... a hero there, somewhere.
Posted by Tom B. at 6:12 AM