Who Are Those Guys? - Albert Bessler 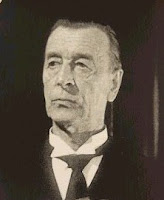 Albert Bessler was born in Hamburg, Germany on February 15, 1905. Trained to be a banker he took acting lessons before his acting debut in 1927 in Hamburg. He then worked at theaters in Bytom, Wuppertal and as an actor appeared before the troops in the Russian campaign during World War II. He first appeared in  film in 1942, where he gained experience in the propaganda front for the Terra movie theater.

After the Second World War Bessler worked as a performer at the park theater in Berlin-Steglitz, as the Schlossparktheater part of the Schiller Theater and was appointed to the State Theatre. Later, he became director and chief editor, and deputy director of the State Theatre Theatres in Berlin. In 1972 in Bessler was made ​​an honorary member, when he was forced to retired due to a serious illness.

In addition to his theater work Bessler acted in postwar films. In addition to the DEFA film “Die blauen Schwerter” (1949) he played mainly in productions with West German film companies. Among his best known film roles are certainly some of the Edgar Wallace films, such as “Der Zinker” and the Doctor Mabuse film series. His most famous television role is certainly that of the dodgy physician Dr. Norman Swanson in the Francis Durbridge thriller classic ‘Melissa’ (1966).

Albert Bessler appeared in the Euro-western “Suncorched” (1965) with Mark Stevens, Mario Adorf and Marianne Koch and the TV western ‘The Mexican Revolution’ (1968).