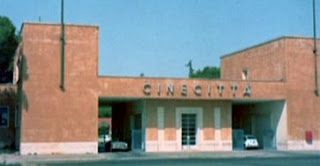 We continue our search for film locations from “Death Rides a Horse”. After Ryan sees the two men who have been trailing him since he left prison enter town he retreats to his room in the hotel. That night the two men climb onto the balcony of the hotel and enter Ryan’s room through an open window. As they prepare to shoot him while he sleeps they are surprised by Ryan who, expecting them, has taken a position on the floor in the corner of the room and shoots killing the two intruders.

This scene was shot in one of the many of the soundstages at Cinecitta Studios in Rome.