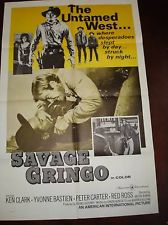 On a farm Marty Hillmann and his wife Kay live in constant tension. One day a young cowboy Ringo Nebraska arrives and attracts the interest of both spouses: the man for his use with a gun and the woman's who is captivated by his rude by compelling charm. Marty has been the object of persecution on the part of the clever Carter, his sworn enemy, and is unable to induce the sheriff Bert to take action against Carter. Carter has the ability to remove any evidence of the crimes he’s committed. The first test on Ringo by the men of Carter is in the town saloon, from there the tempo only increases. After an attack in which Marty is seriously injured, Carter kills the sheriff putting the blame on Ringo and takes the farm from his dying enemy and imposes his will on Kay and to find a big booty. Ringo, finally discovers the truth and succeeds with his prowess to eliminate the bandit, then, turning a deaf ear to the calls from Kay, moves away disappointed by such perversity.