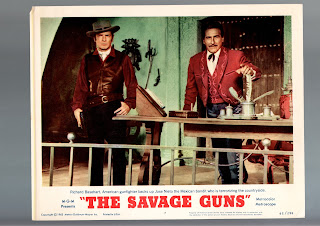 Near the Arizona Territory, in a small valley in the Mexican state of Sonora around 1870, Steve Fallon, a drifter and gun-for-hire, is seriously wounded while on the trail and is found by Mike Summers and his wife, Franchea. He is taken into their home and, while recovering, he learns that a local land baron, Ortega, is pressuring local ranchers to sell their land to him with the help of Danny Post and his gang of outlaws. Fallon also develops feelings for Fanchea's sister, Juana.

Mike Summers, a former Confederate officer, had become a pacifist following his experiences during the American Civil War. Refusing to even wear a gun, he is defenseless when Post arrives at the ranch to collect "protection" money. Confronted by Fallon, Post is disarmed and loses to Fallon in a brawl. He is eventually run out of town after a gunfight with Fallon ends with three of his companions dead.

Ortega responds by taking over the gang himself and leading a raid against the Summers ranch and has Fallon's hands crushed under a wagon. Danny Post soon returns, under the belief that Fallon has been killed, and turns on Ortega murdering his former employer. Riding to the Summers ranch, he sees the helpless Fallon and threatens to shoot him when Summers grabs a nearby gun and kills Post in order to save Fallon's life.