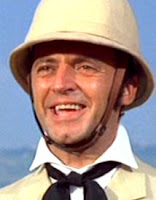 A bit clumsy, with the look of a bewildered puppy - Eddie Arent became famous for his performances in the Edgar Wallace movies. The Wallace thrillers belong to the escapism of the late post-war period, but when you look at them today, they are kind of amazing in their quirky humor.
Arent died in Munich, Germany on May 28, 2013. He was 88


Arent was born on May 5, 1925 in Gdansk, after the war he began initially as a comedian. He was actually a comedian, not an actor directly, unlike most of his colleagues, he did not come out of the theater. The comic roles gave him an interest in the cinema, in the first of the Wallace films, “Der Frosch mit der Maske” (1959) and then also he had more comic performances, as the cinema put out more adventures, with Karl May Arent was in the "Treasure of Silver Lake" (1962) the butterfly addicted Lord Castlepool. As Lord Castlepool, Arent appeared in three Euro-westerns: “The Treasure of Silver Lake” (1962), “Last of the Renegades” (1964) and “The Man with the Long Gun” (1968).


As the cinema changed in the seventies of the New German Cinema supplanted the postwar cinema, Arent had not done a lot of movies - he made a few more Pop films, and then disappeared into television, especially as the eternal partner of Harald Juhnke with which he turned the sketch series "Harald and Eddi".
Posted by Tom B. at 12:24 PM