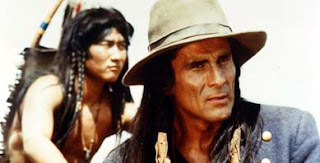 The Far West 1877. After the U.S. Army has eradicated many Indian tribes or driven them into reservations, they turn to the area west of the Rocky Mountains where, among other things, the peaceful tribe of the Nez Perce Indians is located. A cavalry division under Colonel William Howard robs the Indian tribe of a considerable herd of horses to prevent them escaping and can be easily driven into the reserve later. Unlike the neighboring warlike tribe of the Cayuse, the Nez Perce led by their chief oppose force and will later move to Canada.

When the U.S. Army, along with the nine hundred horses requisitioned stops to rest, they are attacked by Cayuse Indians. Colonel Howard takes the opportunity for a treacherous attack and the pursuit of the fugitive Indians. Howard overruns an Indian camp inhabited by the Cayuse and kill the inhabitants and destroy everything. Meanwhile, he leaves Major Bannigan together with six other soldiers with the herd to return alone. The men have much trouble controlling the huge herd and decide to drive them to Fort Lapwei.

Under chief "White Feather", who decides to get the horses back on his own. Disguised as a harmless brave, found fishing with the women, he allows himself to be captured by the young soldier Hunter. His plan is used by whites as a knowledgeable local scout. Together with the remaining soldiers, he drives the herd towards the fort, but separates himself from them and warns a nearby Cayuse settlement of an impending attack. But he is too late. Almost all the women and children are the murdered. The only survivor is a young injured Cayuse maiden.

Upon his re-arrival, he reaps suspicion by the soldiers, but since his services are needed by the whites, they allow him and the squaw to accompany them. However, Sergeant Anderson soon sees through White Feather, and unmasks him as a chief of the Nez Perce. Major Bannigan’s accidental death, make the troop again dependent on the knowledge of the scout. This ultimately leads them to the ruins of Fort Lapwai, which was destroyed and burnt down by the Cayuse. In the ruins, he meets Colonel William Howard, who have withstood  theconstant attacks of the Indians.

However, White Feather takes charge of the situation and finds a weapon to defend himself against the commanding officer. He kills Colonel Howard, while his men are exposed to a renewed attack by the Indians, they become disillusioned and desert in droves. Those who do not flee die in the fort, including Sergeant Anderson. At the end of the film White Feather says goodbye to the squaw, and with the herd snatched his enemies leads them back to his tribe.