Once Upon a Time in Tabernas

Clint Eastwood’s bizarre debate with an empty chair at the Republican National Convention left many puzzled over the actor’s legacy. Will his cameo as a political gunslinger overshadow the star who rose to fame as the raspy-voiced, lone hero of spaghetti westerns?

The Spanish photographer Alvaro Deprit had a more essential question: whatever happened to the barren landscapes that once provided the backdrop for those legendary movies by Italian filmmaker Sergio Leone? His films with Mr. Eastwood — “The Good, the Bad and the Ugly,” “A Fistful of Dollars,” “For a Few Dollars More” and “Once Upon a Time in the West” — defined a new genre and became wildly popular the world over.

“Everyone in my generation was born with those movies,” said Mr. Deprit, during a phone interview from his home in Rome. “They always remain in our collective imagination.” 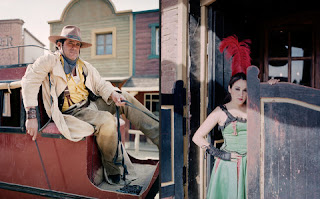 For a month and a half last winter, Mr. Deprit lived in southeastern Spain’s Tabernas Desert and photographed the locations where European directors like Mr. Leone filmed their movies, mainly because the desert resembled the American West — dry, rugged, dusty — and because it required a comparatively lower budget.

Mr. Deprit, 35, who is from Madrid, said a strong sense of fiction and nostalgia pervades the Tabernas Desert today. His photographs are part record, part homage. They are his attempt to capture the surreal quality of a forsaken film location inhabited by people bound to a way of life that has long since ended.

“The feeling you get is of a world which is disappearing,” he said. “It’s a bit melancholy.”

Three studios — Fort Bravo, Mini Hollywood and Western Leone — still sit in the middle of that desert, although they are no longer frequented by the likes of Mr. Eastwood. To the contrary, Mr. Deprit said, the studios have morphed into theme parks and tourist destinations, and have become something of a parody of their former selves.

Throughout the 1960s and 70s, the Tabernas Desert was a hive of cinematic activity. Hundreds of spaghetti westerns were shot there and, for a while, the desolate landscape was awash in gunslinging, gravelly-voiced actors looking for treasure, bandits or revenge.

But after two decades of movie making, Tabernas was abandoned as a film location. Today, for a fee, tourists can wander among the old sets — many built by Mr. Leone and renovated by a hotel chain — or visit the cinema and wagon museums. One theme park offers daily “western shows” in which actors stage a gunfight in the town square, hang an outlaw near the sheriff’s office, and dance the Cancan in the Yellow Rose Saloon. There is also a zoo, a restaurant and souvenir shop.

According to Mr. Deprit, 35, many of the people still living in Tabernas today are actors and stuntmen left over from Mr. Leone’s time. Like Laurence Burton, a member of the Blackfoot Indian Nation in Canada (below), they stayed behind long after the film crews disappeared, hoping to find work in the tourism industry that thrived briefly, and then declined as the economy soured.

Times are tough for those actors, Mr. Deprit said. Many still dress like the cowboys they played in the movies. Some are aging and others struggle with alcoholism. In any case, it’s hard to find work when you’re no longer nimble enough to jump on and off a galloping horse. 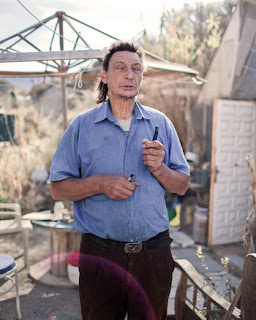 [Laurence Burton, a member of the Blackfoot Indian Nation in Canada. Long after the film crews vacated, Mr. Burton remained, living in a hut in the desert.]

“It’s not just a set,” Mr. Deprit said. “There are people that live there. They remind you all the time about the old times, the golden times, when many movies were made there.”

But those memories cannot trump the area’s reality: even the tourists who visit the area seem disappointed.

“They arrive there and realize that it’s a sort of an improvised show,” Mr. Deprit said. “There are a couple of gunshots and that’s it. It’s quite superficial.”

For Mr. Deprit, documenting the fading film industry in Tabernas is part of an ongoing project about the Andalusia region in Spain. The area is changing quickly, he said, listing the economic crisis and the erosion of traditional lifestyles as evidence.

Sifting through Mr. Deprit’s photographs does feel like exploring a place fading into its afterlife. Nonetheless, fans of Mr. Leone’s films may still hear a familiar soundtrack playing in the background: the clip-clop of horse hooves, a swinging saloon door, rapid gunfire and then, a high lonely whistle echoing across the desert. 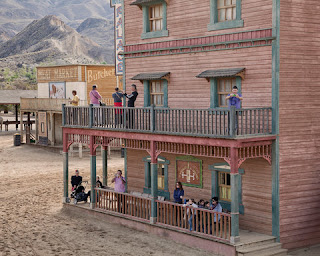 [Special thanks to Michael McQuarry for passing on this article to me.]
Posted by Tom B. at 5:54 AM