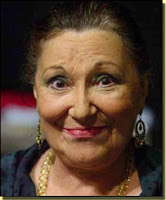 Lagos’ success in “Te espero en el Eslava” allows you to launch her film career with “Muchachas de azul”. Her career in films, although intense at first, does not extend beyond 1966 and subsequent interventions have been very sporadic. She appeared in her only Euro-western “$5.00 for Ringo” in 1965 playing the role of Sarah.

From the mid-sixties, she concentrates in the theater and formed her own company with her husband, actor Ismael Merlo, with whom she married in 1973, highlighting her success with her work in “El Grito”.

In 1998 Vicky returns to television to play Begoña in the TV series ‘El Súper, historias de todos los días’ and in 2007 she appears on the TV show ‘Como el perro y el gato’, with Arturo Fernandez.
Posted by Tom B. at 6:48 AM